This past weekend sickness had come to visit and didn’t leave till Tuesday. I was randomly and horribly sick Saturday and Sunday and lovingly passed it to Trav. Who was then sick Monday and Tuesday. I have been praying that Emma wouldn’t get what we had. I’ve been stuffing her with tons of vitamin C, water and chicken noodle soup. I think it worked because she has been her same crazy 2 yr old self.

What is it about Chicken and Stars? It’s one of the most wonderful thing to eat, but they might want to change the name to ‘Carrots and Stars’ because there’s like, practically no chicken in it. And one little can at the store was $1.80! Doesn’t that seem crazy?! I guess they know sick people will pay whatever…I did. 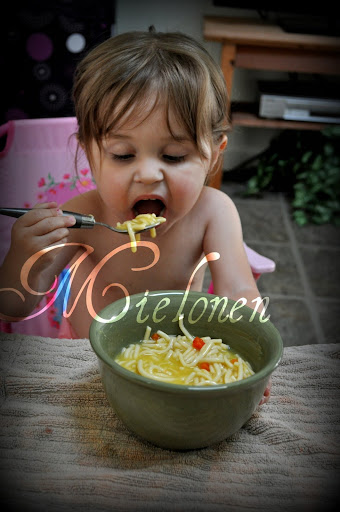 I would be taking much more food pictures but I have no stove or oven where we’re staying. I know. Can you imagine that? NO. STOVE. OR. OVEN. It’s hard to make anything. I was alone, walking down the frozen isle and suddenly began freaking out! I kept thinking ‘I don’t know what to make!’ ‘I don’t know what to make!’ Over and over…I had to shake my head and blink a few times to get a clearer perspective. I bought frozen meals. Gross.

Although I can tell you which frozen foods rock and which suck. Believe me, I would know.

These steamers are not bad. Small portions but good for a really fast side dish! It was enough for us 3 for a side and I personally would have eaten it alone for dinner- but I had to share, it’s a lesson I’m trying to teach Emma. 🙂 It’s a horrible way of eating (we are also eating fruits and canned things) but I keep telling myself that it’s temporary…it’s temporary.

We do have a small toaster oven and one of those grills you can take camping. I made pancakes on it one night and fish on it another night. But if you have ANY ideas about what I could make- I’m all ears! I would love any ideas (oh, and our fridge is dinky (meaning teeny tiny)