We have been having a great time here. Shopping, eating and watching movies with the family. Overall it’s great. However, sprinkled in between those times are weird images and thoughts. OK, so last night as I was in bed, I closed my eyes and saw horrible/evil faces pop up. Freaky. I opened my eyes up and asked Travis if that ever happened to him. “No” was his response. Great.
But, after some praying they went away. Now, I don’t mean for this to sound ‘preachy’ at all. I want to be understood that I respect you and your experiences. All I have to go off of are my experiences. So my beliefs are based off some of those. Well, those and the bible. Anyhoo, I was amazed that those scary (and they were freaky) faces was not some mask I saw early in the day or from a scary movie. They were faces I have never seen before but they were in my mind. How frustrating!
I know there is an enemy and that he will do everything in his power to hurt, confuse or scare me into thinking that I am nothing but a little skinny 5’4 girly girl who is afraid of Star Trek. (the Star Trek part is true- some of the older episodes. Hehe)
But what I DO know is that I am more than that. The best way I can compare it to is me with a different shadow. There’s me that you see and laugh with. But there is also my shadow-a part of me not easily seen. I know that I have a calling on my life to be a warrior for God and that it will touch and greatly encourage others around me.
And when I see those faces, I know it is an example of how scared I make the enemy.
A also have to admit that I have a love affair with being someone from Lord of the Rings. A fighter and one that brings devastation to my enemies. But no. I realized that I have a different calling than one I ‘romantically’ like. I feel I am called more to be a Sam. I cry every time I see his love and devotion to Frodo. 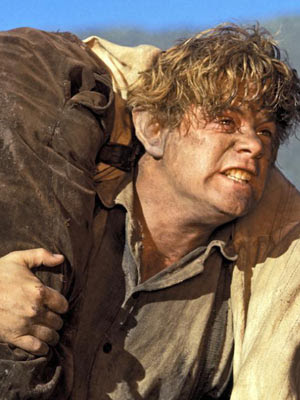