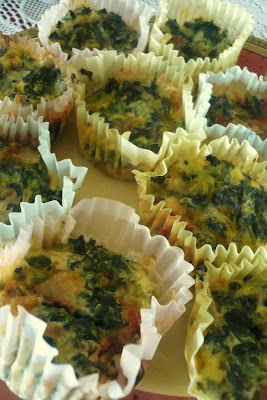 Hurrah! I have a little time while sweet Emma is taking her nap.
Earlier today I was able to go to a nice lunch with some friends. As it was a girls only affair, there was no meat. 🙂 It’s not that we’re against it…it’s just that it takes more time to prepare it and sometimes feels slimy. So anyways, we were able to have a relaxing visit and have a nice ‘cutsie’ meal. There was also a couple of cuddly kitties and a super sweet dog. (and that’s saying something because I’m not a big fan of dogs)
My friend Charis, made the spinach quiches. Apparently they were simple to make and also very tasty! Can you see how they were cooked in cupcake cups?! Genius! Isn’t that amazingly cute AND simple! I’m thinking of getting the recipe and putting them in silver cupcake cups then tieing them with a colorful ribbon. It’s perfect for any holiday, gets the wow factor and is made in no time at all. 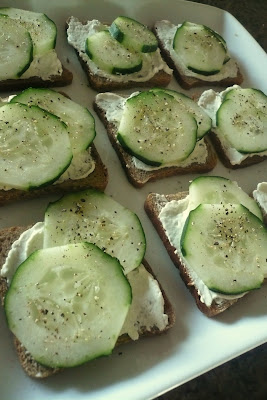 I brought rye bread with herb cream cheese and cucumbers. Pepper to make it pretty. They were really good! I liked the sour-ish flavour the rye gives. Another friend made miniature cappuccino chocolate muffins. I apologize that there isn’t a picture of that- the photo was blurry. 🙁
Emma got a hold of one and when I took it away she screamed like I tore her arm off…ah my little diva. 🙂 Well, off to clean a little and plan the rest of our weekend. I’m praying that there will be NO MORE SNOW! I miss jumping in the car and not having to put a jacket on…*sigh. One nice thing is that with this cold weather hanging around, I get a chance to turn the fire on and read a few of the books collecting dust next to my bed. I bought them just for this season (rain season) and instead I’m spending way to much time reading blogs. Oh well, at least I’m reading right?