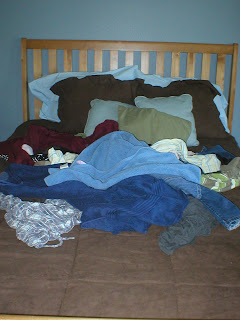 I apologize that it has taken till today to post part-two of my last battle.
As you read before, I had a suspicion of what could be awaiting me upstairs but I had to investigate to confirm what I believed to be awaiting me. As I neared my bedroom, the flapping noise gradually grew and as I opened the door I was face to face with a battle- a battle for my bed. As the photo shows, they were practically taking over the entire comforter! Who cares if they are clean and not dirty?! They always have the nasty habit of multiplying and thus controlling my entire day. I have to move them, clean them, dry them and then fold them. They are so narcissistic! (I swear it’s a conspiracy to take over every house)
*For those who are rolling their eyes at my deli ma, you can click to another blog and read to your hearts desire- no hurt felt here. If you prefer the drama of CNN or any other news site, this blog is not for you. I only deal with the ‘real’ issues here. No crap or drama, no sir-ree. Continuing…
I had to so something, I couldn’t just stand there and watch as they swarmed closer to me. They were trying to overcome me and pin me to the bed. (happened before and left nasty bruises on my wrists) So I called in my number one defense: Chloe the Killer.